Yesterday, after a long but well-worth-it wait, Act IV of Cardboard Computer’s gorgeous point-and-click adventure narrative game Kentucky Route Zero was finally released. If you haven’t heard of it before, you’ll know about it now – one of my favourite games, it’s a magical realist adventure in five acts about “a secret highway in the caves beneath Kentucky, and the mysterious folks who travel it“. I don’t often write reviews for things online, mainly because I know I’ll get carried away and turn what was intended to be a short recommendation into a somewhat lengthy university-level essay, but to be perfectly honest I love Jake, Tamas and Ben’s work so much that I wrote the below as a review on KR0’s Steam page this morning to support them. If you’re looking for something new to play (and even if you aren’t) have a read of what I wrote, check out the game on Steam, GOG or itch.io, and consider giving it a go!

Act I – Ghosts in the Static

Kentucky Route Zero is truly the epitome of the quote “Every Frame a Painting”. Beautiful, sad and thought-provoking, it’s the kind of game you end up sitting in silence and thinking about long after you’ve finished playing. If you’re anything like me you’ll probably be screenshotting your way through your playthrough every chance you get; the cinematography and use of colour is just gorgeous and every move the camera makes works to frame the game’s subjects in the most gorgeous and cinematic fashion possible (much like Shadow of the Colossus does)*. The attention to detail in the storytelling is simply breathtaking and the humour and references to media/information theory are v clever in their implementation (see: the Shannon-Weaver model).

If you enjoy stageplays, quietly weird fiction, and slow, thoughtful and intelligent storytelling then I definitely recommend this game. A wonderful example of Southern Gothic literature and excellent playwriting, it touches on themes such as debt, poverty, loss and being lost, and overcoming obstacles. The characters are diverse, sometimes quirky, often sympathetic, and always fascinating and engaging in their own rights. Having just finished Act IV last night in one sitting I’m left fairly heartbroken at its turn of events, but also hopeful that things will turn out okay in the end, even if the main players may not have much in the means of influence within the world of the game. Ben Babbitt’s soundtrack is beautiful and adds perfectly to the ambience of the game, and the aliased style of the graphics are simple and minimalist (especially whilst traveling the Zero) and yet perfectly unique and fitting to the feel and tone of the game. 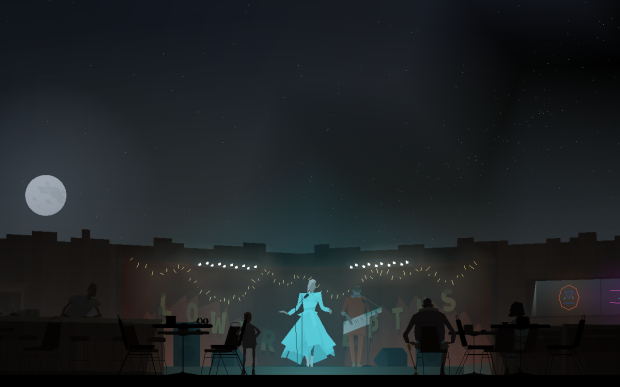 It’s a multitude of things that make Kentucky Route Zero as enchanting as it is – it’s a poem, it’s ghost story, it’s a piece of art cinema; it’s a collection of vignettes on what it means to be lonely vs alone and the many different ways people may find it hard to fit into society. In my experience, it’s best played late at night, when it’s quiet both within and without – being in the right frame of mind is key to fully appreciating the game, but KR0 does a fine job of bringing you into that mood as soon as you start up the game anyway.

I’ll finish here with a quote from a Tweet my friend (who gifted me the game) posted last night:
“He just wants to finish a delivery. She just wants answers about a family mystery. Things complicate, as they do. I hope they un-complicate.”

And so another year has come and drawn to a close! In celebration of our success in surviving it, I think it’s time for a little reflection of some of the happenings of the year – so here we are with the first RETRO / ACTIVE, a (what will hopefully be) annual project showcasing some highlights from the year just gone, including some previously unreleased footage never before shown to the public!

Here, too, is a little retelling of one of my favourite memories of 2015 – one which I had initially planned to include the raw footage of in the above video, but which didn’t end up quite fitting in the end. Picture this – we’re at Wairere, just an hour outside of Hamilton, NZ. It’s February, dead in the height of a hot New Zealand summer, and we’re at the National Parkour Gathering of 2015. It’s day two – the weather is beautiful, the sky is cloudless, and those of us gathered are on a collective mission to scale the face of Wairere Falls to the waterfall up at the top.

END_OF_DOCUMENT_TOKEN_TO_BE_REPLACED

The Rhythm of Korea.

Last month I posted ‘한국문화 ‘ (Hanguk Munhwa/Korean Culture), a short video documenting the inaugural K-Culture Festival in Wellington. The video was passed onto the Korean embassy and I guess they must have liked it, because recently I was lucky enough to be invited by the embassy as a VIP guest to Rhythm of Korea, an event put on (for free no less) to celebrate the National Day of the Republic of Korea. On the invitation card was written “The Rhythm of Korea showcases Korea’s music and dance at the intersection of traditional and contemporary performances by a premier Korean percussion group U-So, together with a world renowned street dance B-Boy group Unlike Harmony Crew”. I was very surprised to receive an invitation – my knowledge of Korean culture is admittedly fairly limited (save for the more well-known aspects of contemporary k-culture, what I learned at the K-Culture Festival, and some elements of traditional culture which overlap with my own heritage) – but I was quite chuffed to be presented with the opportunity to attend the reception and witness for myself some aspects of Korean culture that I haven’t seen before, especially the Samulnori, traditional Korean percussion music. So last night we got dressed up and headed on down to St. James Theatre for the festivities, simultaneously knowing and yet not knowing what exactly to expect of the performance.

END_OF_DOCUMENT_TOKEN_TO_BE_REPLACED

Hey all, long time no blog! I realise I dropped the ball on keeping my WordPress updated quite some time ago, so I spent some time posting my more recent videos and cleaning out old entries. A couple of days later and now we’re all caught up with a better tagging/categorising system and a fresh new theme! To any old followers, it’s nice to see your again. To any new readers, feel free to hit the follow button to keep up with my entries, or head on over to my Facebook and give that a like.

I’ve been looking at ways I can improve my social media presence so I can let folks know a little more about my goings on behind the camera, and maybe get in touch with other like-minded filmmakers/writers/creatives (or even potential clients!). Also I kind of miss blogging and Facebook isn’t really an ideal medium when you want to slam out heaps of text, haha.

So from now on I’m going to make a conscientious effort to keep this blog updated – not just YouTube and Instagram crossposts, but things like progress entries, my thoughts on film/media, my workflow, behind the scenes stuff, and maybe little writeups following each little video project that I do. Let’s start with a little update on some recently-completed and ongoing projects.

END_OF_DOCUMENT_TOKEN_TO_BE_REPLACED

Michelle is an independent filmmaker/editor, videographer and writer based in Wellington, New Zealand.

Michelle is an independent filmmaker/editor, videographer and writer based in Wellington, New Zealand.